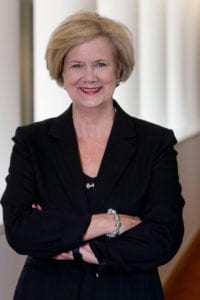 On Thursday evening Janice Kreamer, founding PrincipalsConnect board member, was honored with the prestigious Carol Brooks Community Guardian Torch Award by the Ad Hoc Group Against Crime. This award recognizes an individual for emulating the highest level of community guardianship as set by the example of Carol Brooks.

Janice Kreamer is the former chairman of the Kauffman Foundation Board of Trustees. She joined the board in December of 2006. She is the retired president and CEO of the Greater Kansas City Community Foundation and Affiliated Trusts.

Kreamer is also known nationally for her leadership of community foundations and especially for her pioneering work focused on donor intent. Under her leadership, the Greater Kansas City Community Foundation’s asset base grew from about $14 million to $1 billion. Today, it is among the leaders in gifts received assets, and grants made among the more than 650 community foundations across the country.